A juvenile titanosaur was discovered on Elderslie Station and excavated by staff and volunteers from the Museum in 2012. Most of the bones of the titanosaur were in remarkably good condition and were located about one metre below the surface.

Research on the juvenile titanosaur was led by Museum Research Associate Samantha Rigby who is undertaking a Master of Science (Research) at Swinburne University of Technology under the supervision of Dr Stephen Poropat. Each bone from the specimen was scanned to create three-dimensional models to digitally compare them with other sauropod remains in the Museum collection. This comparison suggests the small specimen belongs to Diamantinasaurus though with juvenile characteristics, such as unfused vertebrae, minimal muscle scarring, smooth bone texturing and marked proportional differences to an adult.

At the time of its death, this juvenile titanosaur weighed around 4.2 tonnes and its bones were growing allometrically, meaning that its bones changed shape and different parts of its body grew at different rates. The limb bones (humerus, thumb claw and femur) of this juvenile titanosaur grew at a more rapid rate, compared to its back and shoulder bones. The limb bones are also narrower in width when compared with the robust limb bones of an adult Diamantinasaurus, suggesting that as Diamantinasaurus grew, its limb bones became more robust to enable it to support its immense weight.

The skeleton of the young sauropod is almost 10% complete and includes three thoracic vertebrae, several ribs, a scapula, a humerus, a thumb claw and a femur.  This exceedingly rare and globally significant find provides important insights into the growth patterns of sauropod dinosaurs and, in particular, titanosaurs. 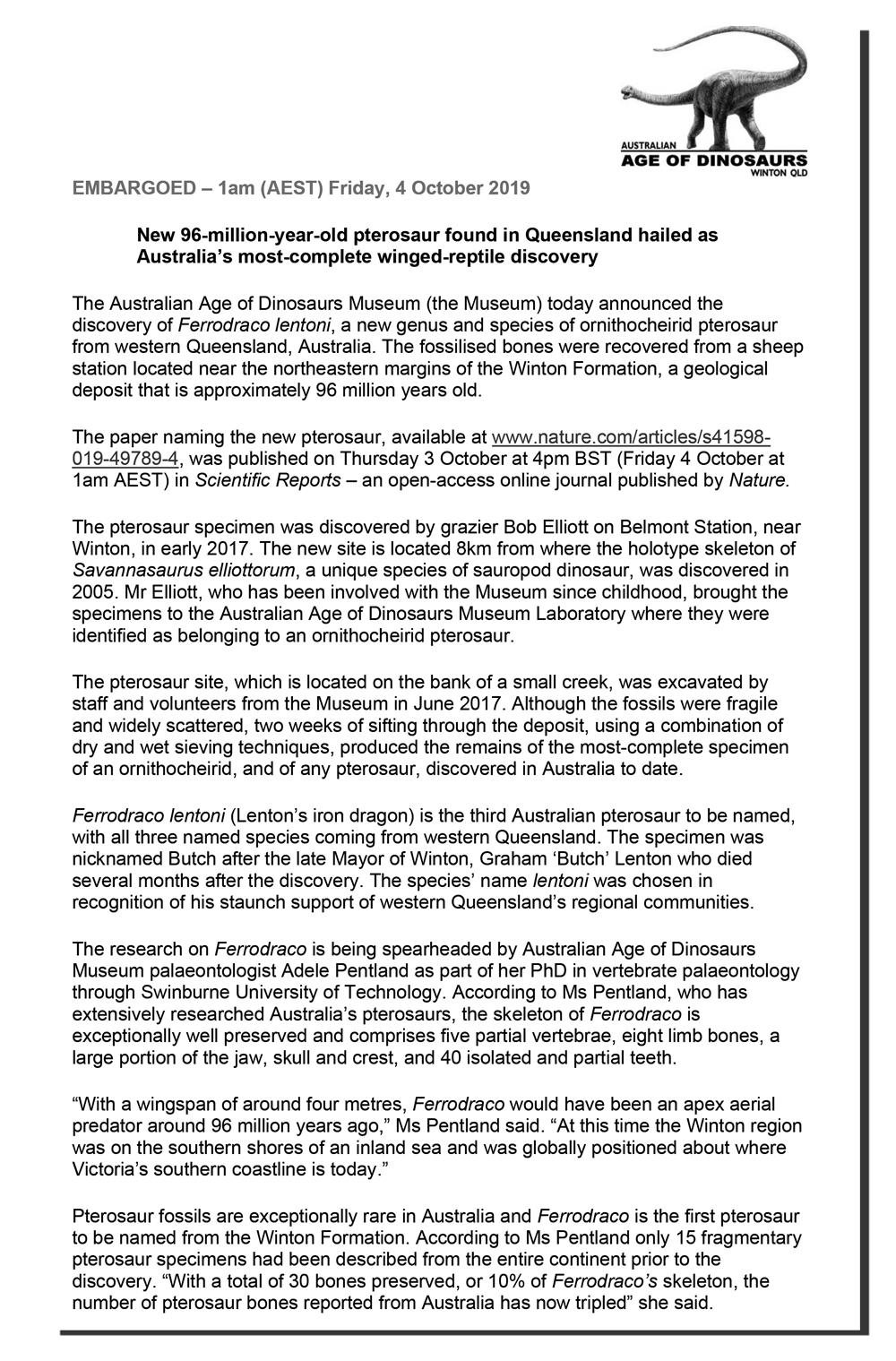 2022 Crocodile discovered with dinosaur in stomach

The crocodile specimen was discovered on Elderslie Station, near Winton and excavated by staff and volunteers from the Museum in 2010. Preserved in a soft siltstone concretion, the fossil was partially crushed by a front-end loader during the removal of overburden from a sauropod dinosaur excavation site. Numerous small bones exposed within the fractured concretion revealed the partial skeleton of a small Cretaceous animal.

Confractosuchus sauroktonos (or the broken dinosaur killer) is the second crocodile to be named from the Winton Formation, while its last meal is the first skeletal remains of an ornithopod from the Winton Formation and the first evidence of crocodile/dinosaur predation in Australia. The discovery of a small juvenile ornithopod in the gut contents of a Cretaceous-aged crocodile is extremely rare, as only a handful of examples of dinosaur predation are known globally.

Research on Confractosuchus was led by Australian Age of Dinosaurs Museum Research Associate Dr Matt White through the University of New England in collaboration with the Australian Nuclear Science and Technology Organisation (ANSTO). The small densely packed and fragmented bones in the concretion were too fragile for rock to be removed from them by conventional mechanical preparation methods so, in order to identify the animal, the fragmented concretion was placed in the care of Dr Joseph Bevitt, Senior Instrument Scientist at ANSTO. Dr Bevitt used neutron and synchrotron X-ray micro-CT scanning technologies to identify where bones were located within the concretion. The scan data files were then used by Dr White to digitally prepare the specimen, a process that involved ten months of computer processing, so that a 3D reconstruction of the bones could be made. 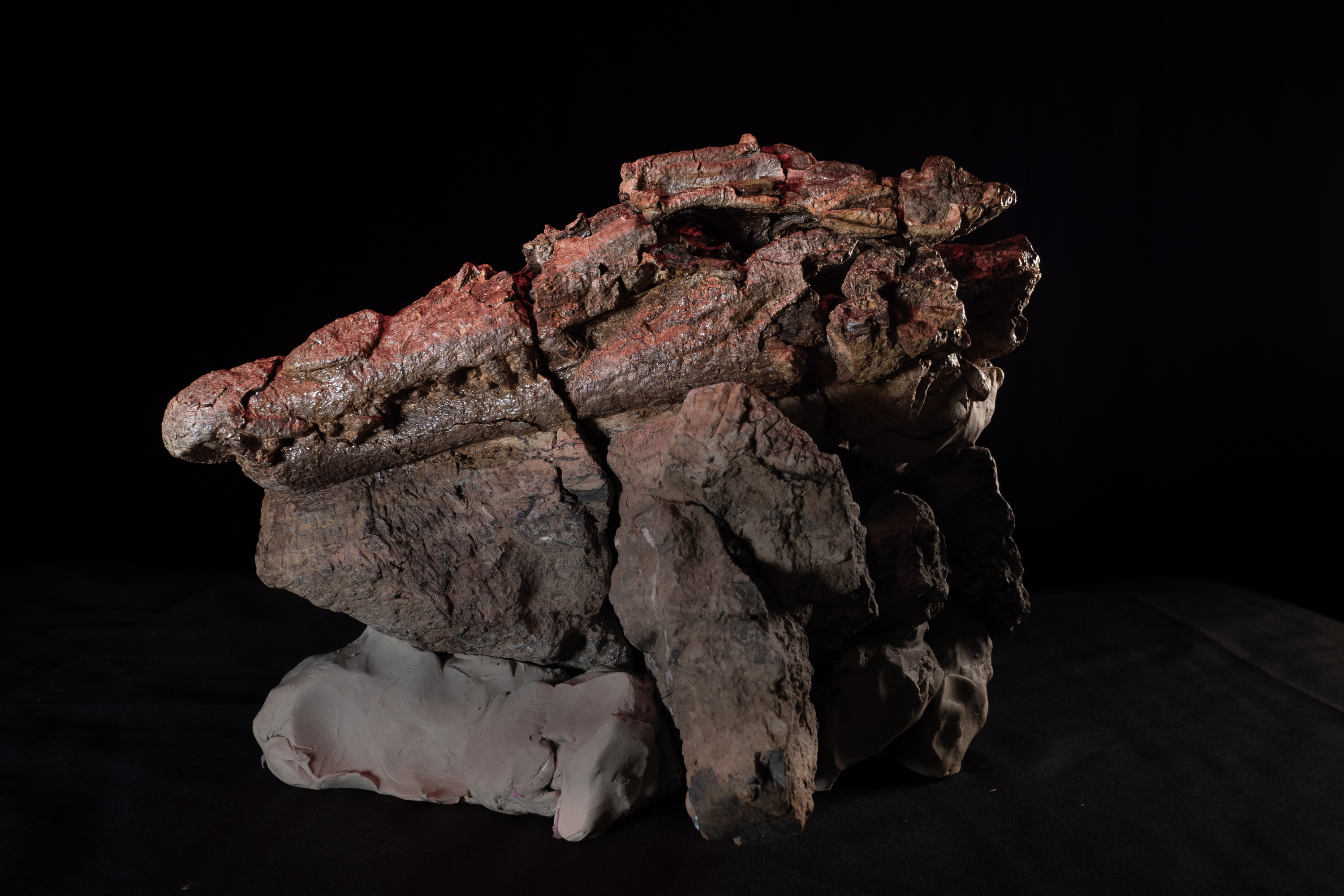 The skeleton of this new species includes a near-complete skull with dentition and semi-articulated postcranial skeleton, though its tail and hindlimbs are missing. At the time of its death Confractosuchus was around 2.5m long, making the young ornithopod an easy meal.

Given the condition of the partly digested ornithopod and the limited comparable material in Australia, an exact classification hasn’t been possible. However, at the time of its death the ornithopod was only a juvenile weighing up to 1.7kg. While being eaten, one of the ornithopod’s femurs was sheared in half and the other femur bitten so hard, a tooth mark was left on the surface of the bone. As there is evidence of fossil articulation, Confractosuchus either directly killed or scavenged the ornithopod quickly after its death.

In 2017 on the banks of a creek on a remote property outside of Winton local grazier Bob Elliott discovered parts of what would become the most complete pterosaur ever found in Australia. He identified parts of the lower jaw, incomplete bones from the wing and a partial tooth. Pterosaur fossils are rare in Australia with fewer than 20 specimens reported. Their rarity is due to the hollow nature of their bones, as well as the limited outcrop of Mesozoic rock found in Australia. This large pterosaur, represented by a single well-preserved specimen, would have soared across the skies of prehistoric Winton 96 million years ago, and was most like an apex predator. Analysis of the bones indicate that this pterosaur was fully grown at the time of its death, with a wingspan of around four metres. 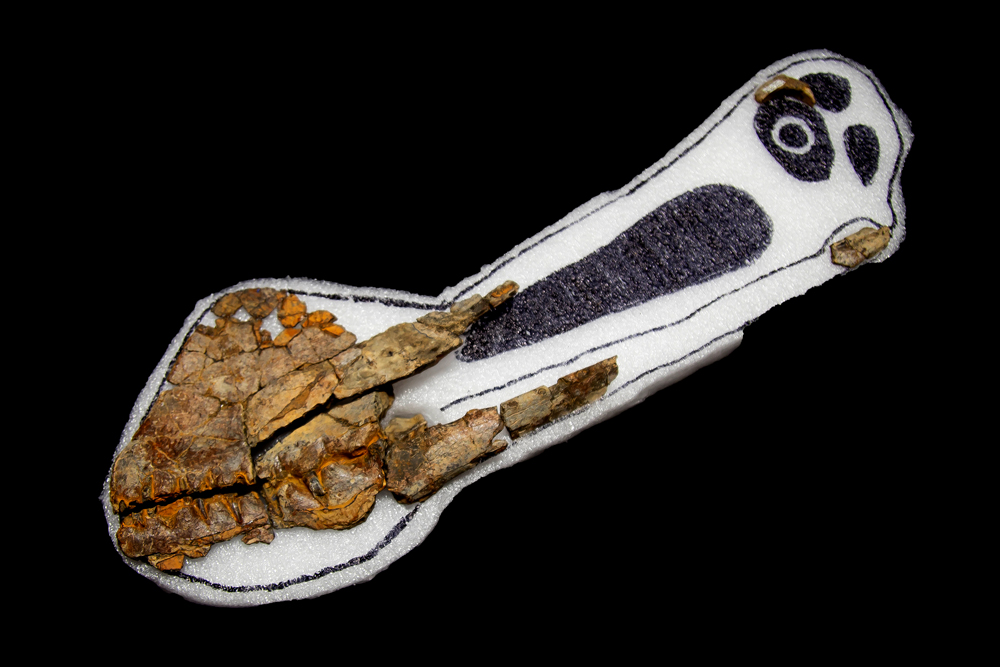 Research indicates that this Australian pterosaur was more closely related to pterosaurs from England than to pterosaurs from South America. This supports the hypothesis that these large, winged reptiles could easily travel across oceans. Ferrodraco also might represent a late-surviving member of the group of pterosaurs known as Anhangueria; however, more precise age constraints are needed for the type locality to prove this.

Named Ferrodraco lentoni, the species name honours former Winton Shire Mayor Graham Thomas ‘Butch’ Lenton, for his years of service to the Winton community and in recognition for his support of the Australian Age of Dinosaurs Museum of Natural History. The pterosaur specimen is also nicknamed ‘Butch’ in his honour and is now on permanent public display at the Museum.

In 2018, at the edge of a creek channel on a remote property just outside of Winton, dinosaur tracks were discovered. At double the length of two basketball courts, the tracks extend over 50m and include three distinct dinosaur types: huge sauropods, small to medium–sized ornithopods and tiny theropods. This is significant as finding the footprints of small dinosaurs associated with those of large ones is unusual, although not entirely unprecedented. These well preserved inchnofossils represent a few days, 95 million years ago, when dinosaurs roamed western Queensland. 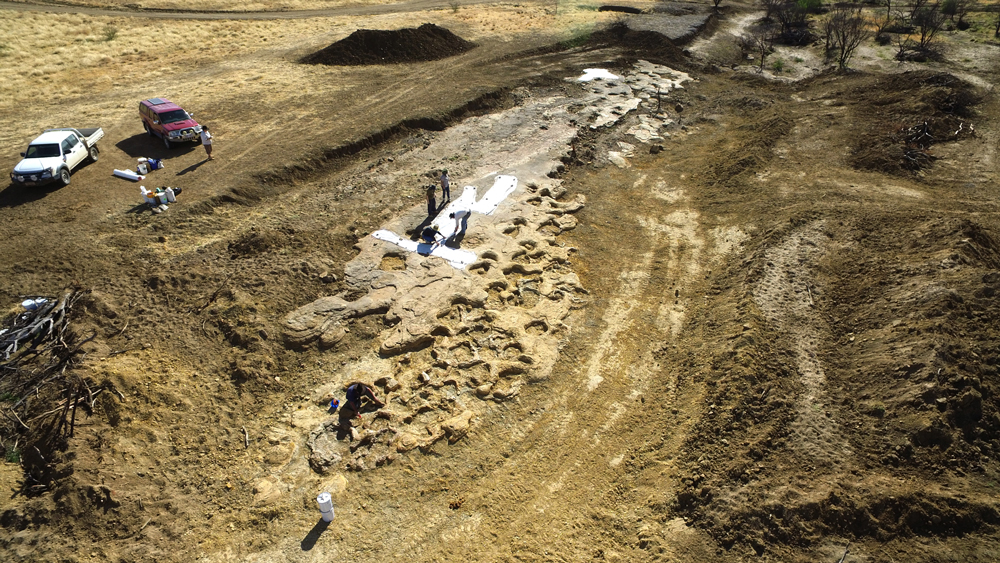 These tracks are the first recorded evidence of substantial walking tracks for sauropods in Australia and the first Cretaceous-aged sequence of solitary ornithopod tracks in Australia. Research and interpretation of the new site will provide insight into the speeds, gaits and body sizes of the dinosaurs as well as the herd dynamics of sauropod dinosaurs.

The new site was first exposed in January/February 2000 when a small creek changed its course following large-scale flooding in the Winton district. However, the presence of dinosaur tracks was not recognised by landowners at this time. Repeated rain and flood events have since taken their toll on the fossilised tracks so that many of them now require major restoration. Excavation works carried out by the Museum in April 2018 uncovered an exceptionally well-preserved extension of the trackway but, as the majority of these new tracks are in fragile unconsolidated sandstone and are below water level in the creek bed, they will be lost forever if they are not recovered urgently.

The scientific value of these tracks make them a national treasure of international relevance and, once safely removed to the Museum, they will provide regional Queensland with a major tourism and heritage asset. Relocating the entire trackway to the Museum is a massive undertaking and is going to take many months of staff and volunteer labour to complete but their conservation is an absolute priority. These tracks will be on show to the public by late 2020. 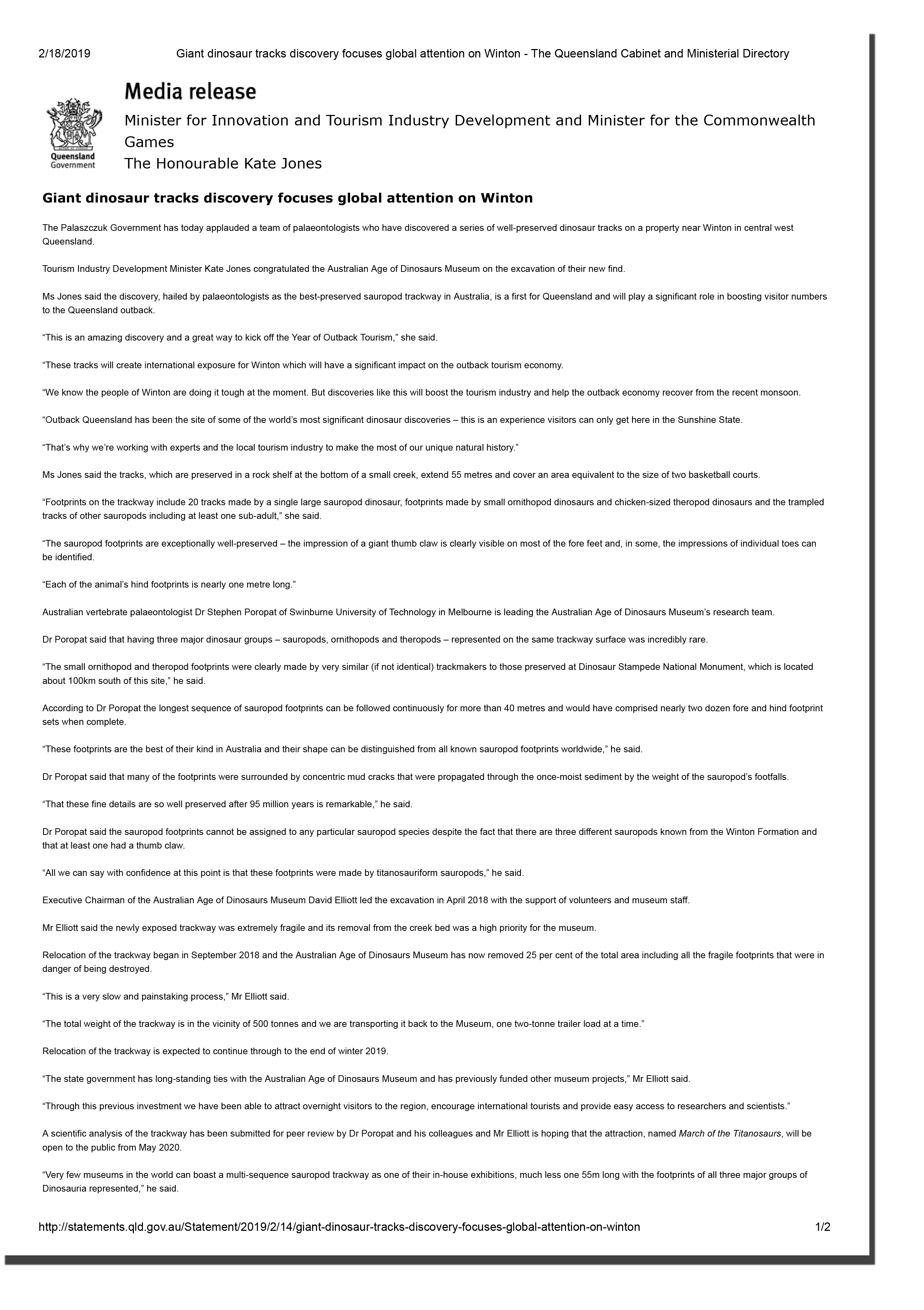