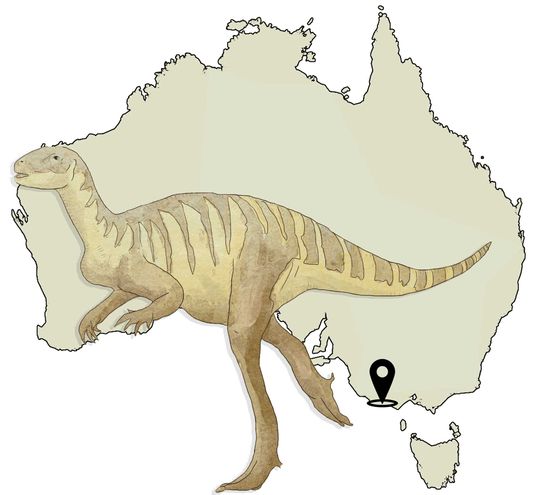 Locality
The holotype comes from the Flat Rocks site which consists of a series of ∼1 m deep excavations on the coastal, wave-eroded rock platform within the Bunurong Marine National Park, 2.2 km southwest of Inverloch in Victoria, southeastern Australia.

G. dorisae from the upper Wonthaggi Formation is the fourth Victorian ornithopod named from cranial remains and the third described from the maxilla. The identification of the new  ornithopod, G. dorisae and three further jaw morphotypes from the Flat Rocks locality in the upper Barremian Wonthaggi Formation complements the four previously named ornithopods from Victoria—Atlascopcosaurus loadsi, Diluvicursor pickeringi, Leaellynasaura amicagraphica and Qantassaurus intrepidus.

Although equivalent, some of these taxa is possible, G.dorisae and the newly identified craniodental morphotypes confirm that a highly diverse small-bodied ornithopod flourished in the environment of the Australian-Antarctic rift valley.

The newly described ornithopod is also around 12 million years older than fossils of the small ornithopod Diluvicursor pickeringi, which was found in the 113-million-year-old rocks along the coast of the Otway region to the south-west of Melbourne.

Back to Dinosaur menu    Next - Kakuru