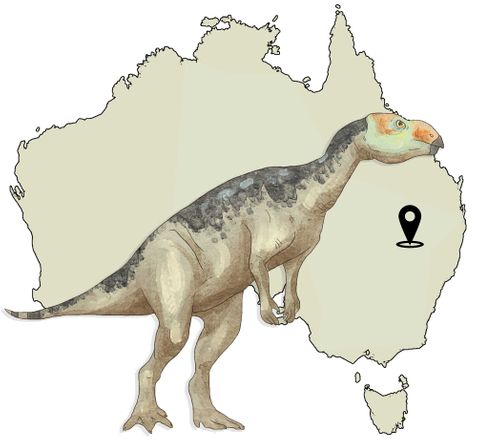 [Robert] Foster’s (the miner who discovered the bone bed) sheep yard (language of the Yuwaalaraay, Yuwaalayaay and Gamilaraay peoples after the sheepyard opal field where the bone bed is located)

Discovery and publication
In 1984 large bones were discovered in situ approximately 10m underground in an opal mine at the Sheepyard opal field approximately 40km south-west of the town of Lightning Ridge in New South Wales. Many of the bones were broken up in the search for opal however, several were taken to the Australian Museum in Sydney where they were identified. A field party under the direction of Dr Alex Ritchie was later dispatched to Lightning Ridge to excavate the remaining bones.

After initial preparation at the Australian Museum, the bones were temporarily displayed at commercial premises in Sydney then loaned and eventually donated to the Australian Opal Centre in Lightning Ridge.

The accumulation of bones at the Sheepyard locality is exceptional and represents the only known monodominant ornithopod bone bed from Australia. Recovered elements represent parts of at least four individuals of varying size (based on scapulae), although most of the elements appear to belong to a single individual based on their proportions. Histological verification of their ages was not possible due to their preservation as pseudomorphs in common and precious opal. With the exception of two theropod bones, a turtle vertebra, and a few freshwater mussel shells no other faunal elements were recovered from the mine, and none of the ornithopod elements show variation indicative of more than one taxon. Fostoria dhimbangunmal was published in the Journal of Vertebrate Paleontology by Dr Phil R Bell and colleagues in 2019 and provide the first relatively comprehensive record of an ornithopod from New South Wales.

Description
The fossilised remains of at least four individuals at the Sheepyard lacality represents the only mass accumulation of ornithischian remains from the Australian continent. The Griman Creek Formation (Cenomanian), where the bone bed is located, is stratigraphically higher than the Albian occurrences of Muttaburrasaurus (Allaru Mudstone and Mackunda Formation) in Queensland, making F. dhimbangunmal the youngest known iguanodontian from Australia, although footprints in the upper part of the Winton Formation suggest they were distributed elsewhere in Australia up to at least the 93.9 Mya.

Back to Dinosaur menu    Next - Fulgurotherium