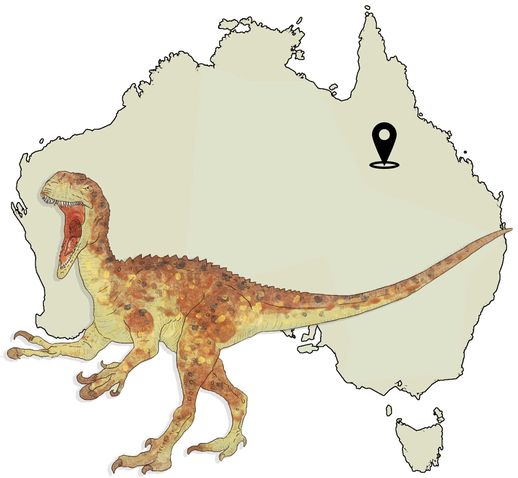 Discovery and publication
Found on Elderslie station (near Winton) Queensland in 2006 during the first excavation of the “Matilda” site (discovered by Sandra Muir) by the Australian Age of Dinosaurs Museum of Natural History; digging continued at the site for five field seasons in total, terminating in 2010. Australovenator was named and described in 2009 by Dr Scott Hocknull and others, and has undergone numerous revisions and augmentations led by Dr Matt White. The remains of this theropod were found intermingled with the sauropod Diamantinasaurus.

Description
Australovenator was established on the basis of the most complete non-avian theropod skeleton (~30% complete) ever found in Australia. This skeleton preserves almost complete arms and hands, legs and feet, several back and belly ribs, the paired front halves of the lower jaw, and several teeth. It is unique by Australian standards, and unusual worldwide, because its remains were found interspersed with those of a sauropod, Diamantinasaurus; it is unusual to find two such different dinosaurs buried together.

Australovenator is the largest theropod from Australia known from decent remains, although opalised fragments of slightly larger theropods have been found at Lightning Ridge, New South Wales, and beautifully preserved bones of similarly-sized theropods have been found in coastal Victoria. Australovenator, as well as these other specimens, appear to pertain to the theropod group known as Megaraptora. The majority of megaraptorans are known from the southern continents (with South America home to most) which were once united as Gondwana, although one possible megaraptoran (Fukuiraptor) is known from Japan.

There is some debate over the position of Megaraptora on the theropod family tree. Some palaeontologists place this group within Allosauroidea, a group which is known to have had an almost worldwide distribution and which includes some of the largest theropods known (Carcharodontosaurus, Giganotosaurus). If so, megaraptorans would almost certainly have had scaly skin, because the few allosaurs for which we have imprints, had scaly skin. However, other palaeontologists ally the megaraptorans with Tyrannosauroidea, the group that includes Tyrannosaurus rex and a plethora of other, more primitive forms. If so, there is a chance that Australovenator had feathers—probably like those of modern day flightless birds—because tyrannosauroids belong in the group Coelurosauria, and all coelurosaurs are known to have had at least primitive feathers covering their bodies.

Australovenator was a medium-sized predator, approximately 1.6m tall at the hips and 5–6m long from tip to tail. Its long, muscular legs would have allowed it to run fast, although not as quickly as modern emus or ostriches. Australovenator would, however, have been quite agile—if it chased the small ornithopods with which it shared its habitat, it would have needed to be. The jaws of Australovenator were rather lightly built, and the teeth that lined these jaws were serrated but rather small. The most dangerous weapons Australovenator possessed were its arms, each hand bearing three fingers, and each finger bearing a wickedly-curved claw. The inner two claws were particularly large and strong.

Back to Dinosaur menu    Next - Austrosaurus