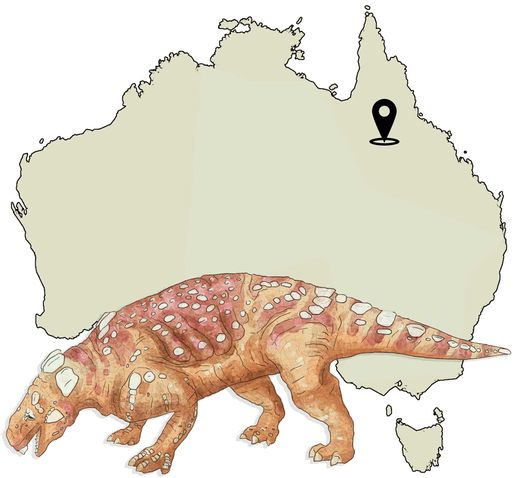 Discovery and publication
Found on Marathon Station (near Richmond) Queensland, in 1989. It was found by grazier Ian Ievers. This find followed hot on the heels of his discovery of an almost complete marine reptile skeleton (the “Richmond pliosaur”; more correctly the Richmond polycotylid), also on Marathon. Ievers soon posted the ankle of the new specimen to the Queensland Museum. When it arrived, Dr Ralph Molnar and Dr Mary Wade quickly realised that it pertained to an ornithischian (bird-hipped) dinosaur—a relative rarity in Queensland. In early 1990, a Queensland Museum team led by Ralph Molnar, and a University of New South Wales team led by Dr Paul Willis, collected the bulk of the specimen (Ian Ievers, Mary Wade and Laurie Beirne collected more later), which was taken back to Queensland Museum. It soon became clear that what Ievers had found was the most complete non-avian dinosaur skeleton ever discovered in Australia, and that it was an ankylosaur. In 1996, Molnar published a brief description of the specimen, designating it as Minmi sp.: he thought it was the same genus as Minmi paravertebra, but a different species or subspecies. Since that time, additional preparation with acid and CT scans of the skull have facilitated further study by Lucy Leahey and others; in 2015 they suggested that the Richmond ankylosaur was a completely different genus and species from the Roma Minmi.

Description
The type specimen of Kunbarrasaurus ieversi is the most complete non-avian dinosaur skeleton ever found in Australia. It is also one of the most complete dinosaur skeletons ever found in Gondwana, and one of the most complete ankylosaurs ever found anywhere in the world! The skeleton includes an almost complete skull, vertebrae from the neck right down to the middle of the tail, most of the left shoulder and arm (although not the hand), the pelvis, both thigh bones, other limb bones, and a nearly complete set of armour comprising large spikes, medium-sized scutes and tiny ossicles. Even the stomach contents of Kunbarrasaurus were preserved—an exceptionally rare circumstance which has given us an unprecedented insight of the feeding preferences of this dinosaur.

As is the case with Austrosaurus and Muttaburrasaurus, the body of Kunbarrasaurus was preserved in sediments that formed at the bottom of the Eromanga Sea. Obviously though, Kunbarrasaurus was not aquatic—its gut contents include remains of primitive flowering plants, attesting to the fact that it lived on land. Kunbarrasaurus would have died on land, but as its tissues started to decompose, its corpse bloated. Somehow, the carcass was washed out to sea, and for some time it floated. Eventually, the carcass would have degassed, and the heavy armour would have caused it to sink to the bottom. Over time, it was buried, and the sediments became the sedimentary rocks in which it was fossilised.

Back to Dinosaur menu    Next - Leaellynasaura