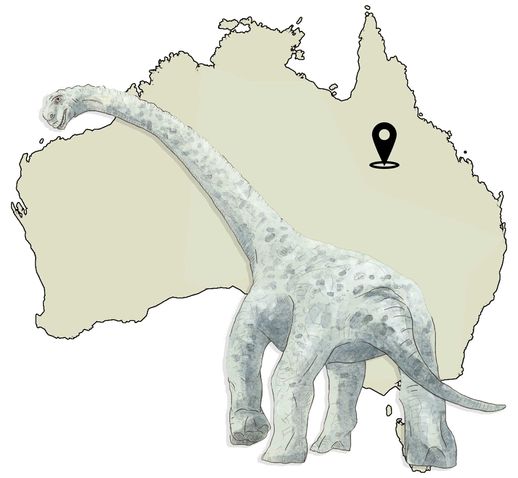 Discovery and publication
Found on Belmont Station (near Winton), Queensland, in 2005 by the property owner, David Elliott. The site was dubbed the “Ho-Hum” site and was excavated by the Australian Age of Dinosaurs Museum of Natural History that same year. The dinosaur was nicknamed “Wade” because renowned Australian palaeontologist Dr Mary Wade passed away at her home while the dig at the “Ho-Hum” site was in progress; thus, the find was named in her honour. Preparation of the fossils was conducted at the Australian Age of Dinosaurs Museum between 2006 and 2014 by trained staff and volunteers. Savannasaurus was named and described in 2016 by Dr Stephen Poropat and others.

Description
Savannasaurus type specimen includes one cervical vertebra, several dorsal vertebrae, the sacrum, more than five caudal vertebrae, many ribs, parts of the shoulder and sternum, partial front limb bones including a complete right front foot, most of the pelvic girdle, an ankle bone and one bone from the hind foot. Taken together they constitute one of the most complete sauropod skeletons ever found in Australia at 20-25% (So third overall behind Rhoetosaurus and Diamantinasaurus.)

Savannasaurus (“Wade”) was one of several types of long-necked, plant-eating sauropods that existed in Queensland during the mid-Cretaceous, 100–95 million years ago. Others include Diamantinasaurus matildae (“Matilda”) and Wintonotitan wattsi (“Clancy”).

Savannasaurus had very wide hips and widely-spaced, stocky limbs with five toes on each foot. Based on the bones available, it appears that the neck of Savannasaurus was longer than its tail, and that the torso was broad and barrel-like. Although we have no knowledge of its skull or teeth, we can be confident that Savannasaurus was entirely herbivorous. The only tooth found with the Savannasaurus skeleton belonged to a meat-eating theropod dinosaur, presumably Australovenator or a close relative.

Savannasaurus is closely related to the contemporary sauropod Diamantinasaurus. Strange as it might seem, it is not unusual to find several different, but closely related, sauropod species living alongside one another. A similar situation is evident in the Upper Jurassic Morrison Formation of the western United States, where at least three (and possibly more) closely-related diplodocid sauropods (Apatosaurus, Diplodocus, Barosaurus) coexisted, in the same setting with other more distantly related sauropods (eg Brachiosaurus, Camarasaurus, Haplocanthosaurus).

Presumably, Savannasaurus and Diamantinasaurus had divergent habits in terms of environmental or dietary preference, and both would have had different habits to their other contemporary, the more distantly related Wintonotitan.

Savannasaurus was 12-15m long, about 2.7-3m tall at the shoulder, would have weighed around 15-20 tonnes. Compared to Diamantinasaurus it would have shared a similar build but with proportionally broader belly and bigger hips.

Back to Dinosaur menu    Next - Serendipaceratops