Donate to the Cretaceous Garden project...

When dinosaurs lived in prehistoric Australia the landscape was in stark contrast to today's arid sunburnt countryside. This prehistoric landscape was an ever-changing world of receding floodplains, humid climatic extremes and expanses of conifer forests. It is the goal of the Museum to recreate this world in the recessed protected gullies within Dinosaur Canyon, so that we can transport visitors back in time to experience life 95 million years ago. 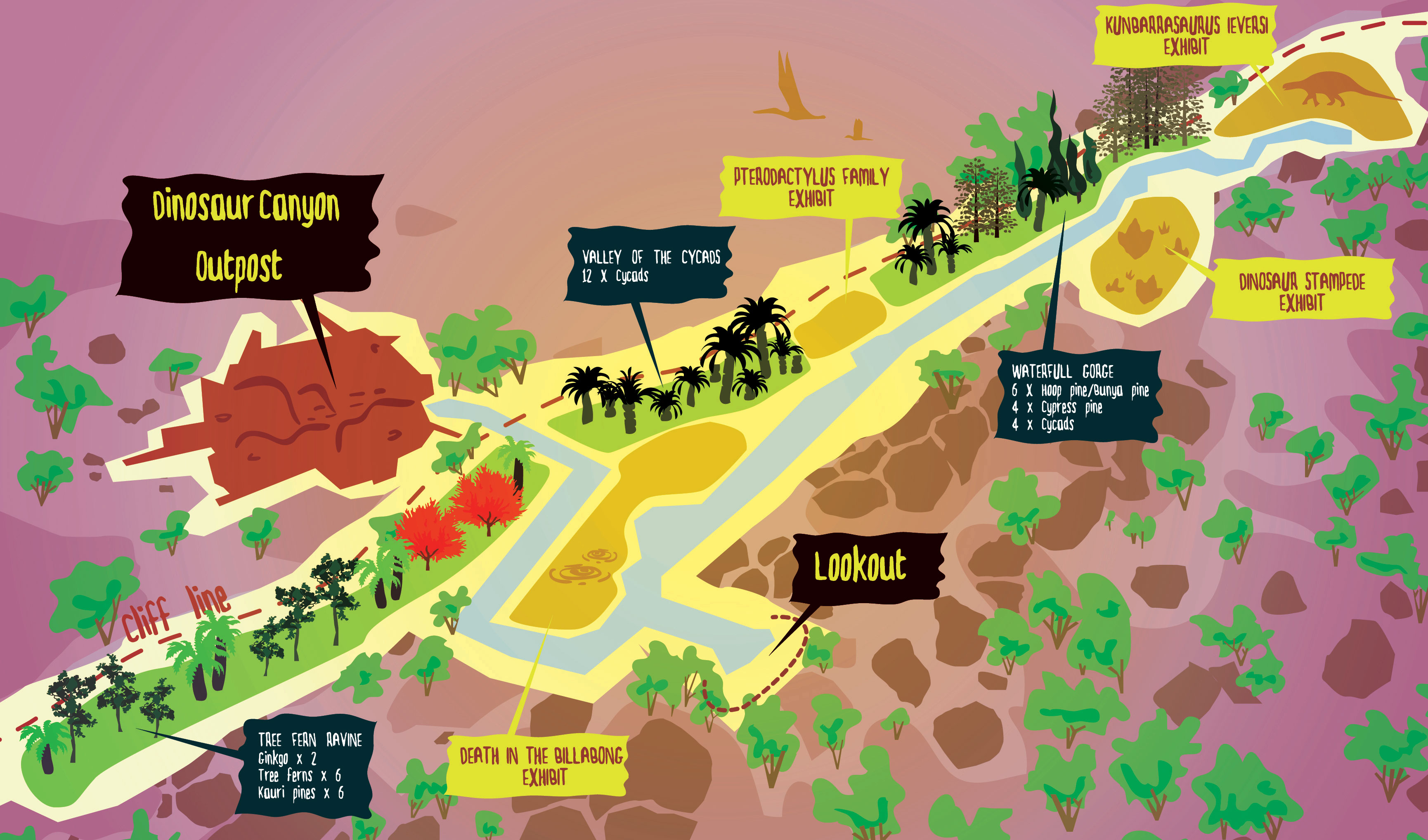 In 2017 we opened Dinosaur Canyon, our first step toward construction of the future Australian Age of Dinosaurs Museum of Natural History. The new addition includes four exhibits on Australia’s extinct dinosaurs and flying reptiles as well as the Valley of the Cycads, the first of several exhibits that will feature in a Cretaceous Garden below the site of the new Museum.

The first plants in the Cretaceous Garden were six fully grown cycads (Macrozamia moorei) that were planted directly after being harvested from a property near Springsure, Queensland in mid-2015. This method of relocating large cycads is fairly common and trees that have had their roots and leaves pruned back to the trunk are often shipped long distances (even to China) for replanting. Despite our best efforts however, all of these beautiful trees perished as a result of termite infestation which we were not aware of at the time. We replaced them with a second lot of five trees in mid-2016 and treated them for termites thinking that this time they would be OK but, in spite of our best endeavours, it appears that these trees are not going to make it either. We now think that a combination of the extreme hot weather over the past couple of years, combined with the extended drought in the Winton Shire is responsible – perhaps it has just been too much stress for old trees with shocked root systems to recover from.

This has been pretty demoralising for our team at the Museum as a lot of hard work went into relocating the trees, not to mention the cost of getting two-tonne trees out to Winton and into very difficult positions in the gorge. It has been a steep learning curve but we are determined not to give in and it is now time to try again. Rather than plant freshly harvested, fully-grown cycads however, we are going to purchase trees that are younger and smaller that were harvested and re-planted in large pots two years ago. These new cycads (also Macrozamia’s) have well-established root systems and are guaranteed to survive. They will be between 1m and 1.8m high and weigh up to 400 kg which is small enough for a team of (strong) volunteers to carry but large enough to have a beautiful presence in the gorge.

As well as the cycads, there will be a range of other ‘dinosaur age’ trees being planted in the Cretaceous Garden including conifers, tree ferns and ginkgos. The Cretaceous Garden is inspired by this ancient environment that the dinosaurs inhabited 95 million years ago. Back then, the Winton area was a cool forested wetland on the shores of an inland sea. High rainfall was common (not like the Winton district over the past five years that’s for sure) and a canopy of open conifer forests dominated the landscape. The waterways contained an abundance of ferns and horsetails – this was a lush country capable of supporting massive long-necked sauropods. The plant species of that time could never survive on the arid plains of western Queensland today. However, in the sheltered gorges of the Jump-Up, we are certain they will flourish, just like the amazing fig trees that currently grow in pockets throughout the escarpment.

The Cretaceous Garden will be a living exhibit where we can truly step back and experience the age of dinosaurs. It will engage visitors senses in a way that pictures and plaques cannot and provide a space where visitors can see, smell, feel and hear what life was like in Winton millions of years ago. The Garden will provide visitors and students with an opportunity to engage in a new, hands-on approach to learning about how our climate has changed over deep time, and how it continues to change today. There is no such thing as normal.

No time to waste
With the weather starting to cool down in western Queensland, it is imperative that we get these new trees planted as soon as possible so that they can get established in the cooler months of winter. Species being planted include the large 300+kg Macrozamia moorei cycads along with advanced specimens of Araucaria cunninghamii (hoop pine); Araucaria bidwillii (bunya pine); Cyathea cooperii (tree fern); Agathis robusta (kauri pine); Callitris columellaris (Cypress pine) and a couple of Ginkgo biloba (also called Chinese maidenhair tree). These have all been ordered to arrive around the middle of April ready for planting at the end of the month.

The total cost to purchase all of the trees, freight them out to Winton and install pipelines and watering systems will be in the order of $15,000. We would love our members to become involved in this project by helping the Museum meet this cost as we did not budget for it in 2018 (we were hoping the large Macrozamia’s might just be dormant but it appears that this is not the case). We really don’t want to go through 2018 with nothing in the Cretaceous Garden exhibition so have bitten the bullet and got the ball rolling. The sooner we get started the sooner we will have a beautiful exhibition for our visitors to enjoy.

The Museum has only got to where it is today through the enthusiasm and generosity of its members so if you would like to contribute something toward helping meet the costs of the Cretaceous Garden we would love to hear from you. All of our donors will be recognised on plaques throughout the Garden so please stipulate if you do not wish for this to happen.

In conclusion, thank you all for your generosity toward the Museum’s projects in previous years and for your enthusiastic support for our work. It is this unity and camaraderie among our members and their desire to contribute to a cause they love and believe in, that makes the Australian Age of Dinosaurs Museum such a special place.

Remember: Donations of $2.00 or more are tax deductible and you will receive a tax receipt. Updates on the garden will be posted to Facebook and sent out to Museum members via the Museum newsletter.

If you would like to donate over the phone or would like more information about this project please contact the Museum’s visitor experience officers, +61 7 4657 0712 or museumfinance@aaod.com.au