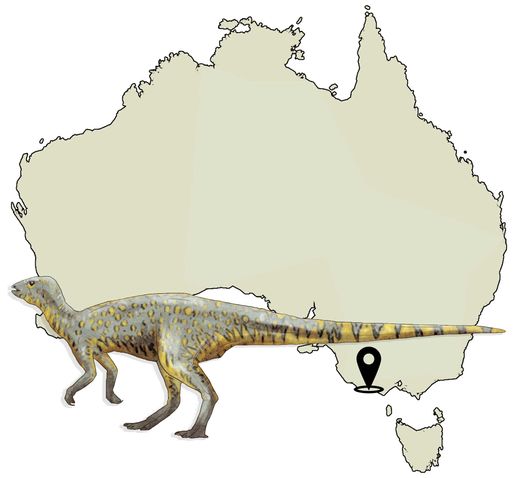 Meaning
Leaellyn’s (Tom Rich & Patricia Vickers-Rich daughter) lizard of the friend writings (amica is Latin for friend, and graphica is Latin for writings, alluding to the support of the Friends of Museum Victoria and the National Geographic Society)
Period
Early Cretaceous (115–110 Mya)

Discovery and publication
Discovered at Dinosaur Cove, Victoria, in 1987 by Michelle Colwell during a dig run by Tom Rich and Pat Vickers-Rich, who named and described it in 1989.

Description
The type specimen of Leaellynasaura is a partial upper jaw with teeth. Other specimens which are thought to have been associated with this partial jaw include a skull roof (which provides evidence of braincase anatomy and large eye sockets) and a partial skeleton comprising the back legs, hips and a very elongate tail with at least 71 vertebrae.

Based on the interpretation that the two skull portions and the hips/legs/tail all belonged to the same animal, many other small ornithopod specimens from Victoria have been referred to Leaellynasaura. It has been held up as a “dinosaur of darkness”, one which had enlarged eyes to enhance its night vision, and one which could have over-wintered in Victoria despite its then more southerly position (close to, if not within, the Antarctic Circle). However, it is possible that the skull only has large eyes because it was a juvenile: young animals often have bigger eyes relative to body size than adults, which makes them very cute. Nevertheless, the braincase seems to show enlarged optic nerves; perhaps Leaellynasaura retained relatively big eyes throughout its lifetime.

The internal structure of the limb bones of Victorian ornithopods has revealed that growth rings were present. This implies that Leaellynasaura grew rapidly for the first two to three years of its life, reached skeletal maturity at five to seven years, and that its growth slowed periodically, probably as a result of seasonal variation. Possible dinosaur burrows found in the same rocks might have been occupied by Leaellynasaura when temperatures dropped to particularly low levels. The tail of Leaellynasaura is also anomalous—it is one of the longest known among dinosaurs (relative to overall body length), comprising more vertebrae than the majority of other dinosaur tails (except for those of some hadrosaurs and diplodocid sauropods). Why would Leaellynasaura have had a long tail when it needed to conserve body heat?

There has been some debate over the association of the Leaellynasaura specimens. Dr Matt Herne has suggested that the skull roof and the upper jaw come from different animals, and that there is no way to demonstrate unequivocally that the hips/legs/tail can be associated with either skull element. Tom Rich continues to defend the original association of the specimens, based on field collection notes and their compatible size. However, what will be needed to resolve the matter once and for all is the discovery of a more complete skeleton preserving the skull roof, the upper jaw, and the hips, legs or tail attached to the skull via the vertebral column (neck/back). This might seem like a pipe dream, but in recent years a skeleton almost fitting these criteria has been found (nicknamed “Noddy”).

A recent analysis suggested that Leaellynasaura was not a true ornithopod, and that it was more primitive than Atlascopcosaurus and Qantassaurus. Time will tell if this is true.

Back to Dinosaur menu    Next - Minmi