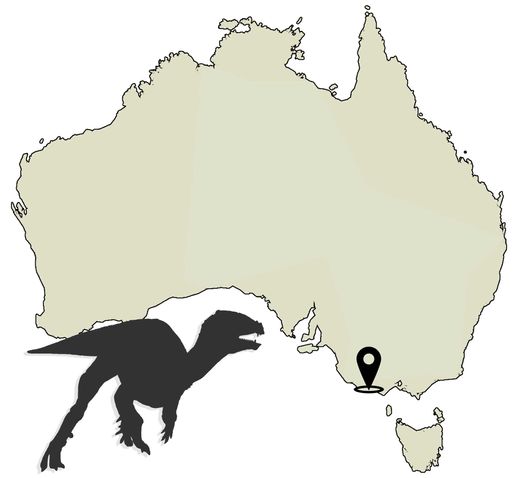 Discovery and publication
The type specimen was found at Point Lewis, Victoria, in 1984. Other specimens were found at Dinosaur Cove West, Dinosaur Cove East and Slippery Rock, Victoria. The discovery was made by many so the credit goes to the whole dig team. Tom Rich and Patricia Vickers-Rich described Atlascopcosaurus in 1989.

Some palaeontologists consider Atlascopcosaurus to be a “nomen dubium”—a doubtful name. However, Atlascopcosaurus was recently included in an analysis of bird-hipped dinosaur relationships and was found to sit within a group of small-bodied ornithopods including the Australian Qantassaurus and two Argentine forms (Gasparinisaura, Anabisetia). This suggests that Atlascopcosaurus and its relatives thrived in Gondwana during the mid-Cretaceous.

There is no doubt that at least two distinct types of small ornithopod roamed western Victoria during the Early Cretaceous, since a partial skeleton of one ornithopod — now named Diluvicursor — has a very different tail structure and length to the one that has been referred to Leaellynasaura. Is it Atlascopcosaurus? The simple but unsatisfying answer is that we don’t know, and won’t until specimens are found that can be compared with both Atlascopcosaurus and Diluvicursor.

Back to Dinosaur menu    Next - Australotitan