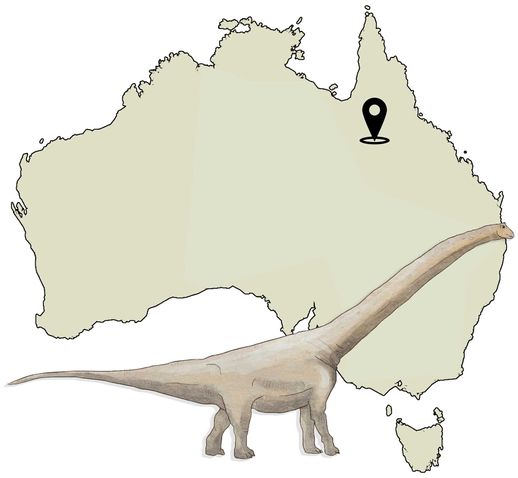 Discovery and publication
Discovered on Clutha station, north of Maxwelton, Queensland, in 1932 by Henry Burgoyne Wade. Heber Longman named Austrosaurus in 1933, after which more bones were sent to Brisbane by Wade and Harley Joseph McKillop. These specimens are still held at the Queensland Museum.

In 2014, Richmond Mayor John Wharton relocated the Austrosaurus type site using a helicopter. Digs led by Dr Timothy Holland and Dr Stephen Poropat in 2014 and 2015 led to the recovery of the ribs of Austrosaurus.

Description
Longman only considered three blocks of rock preserving back vertebrae in his original description of Austrosaurus. However, the Queensland Museum specimens include another 22 chunks of fossiliferous rock, several of which were puzzled back together by Dr Stephen Poropat and Jay Nair. This has revealed that six vertebrae were preserved—the last neck bone and the first five from the torso.

Austrosaurus is a titanosauriform, a big group of sauropods which includes Brachiosaurus, titanosaurs and their relatives. The precise position of Austrosaurus on the titanosauriform part of the sauropod family tree is unclear, but on the basis of the internal structure of its vertebrae it might be a somphospondylan. This sauropod group was named for the spongey internal texture of the vertebrae in front of the hips.

Austrosaurus was a sauropod which must have been around 3.5 metres tall at the hips and shoulders, with a total length of 12–15m.

Back to Dinosaur menu    Next - Diamantinasaurus