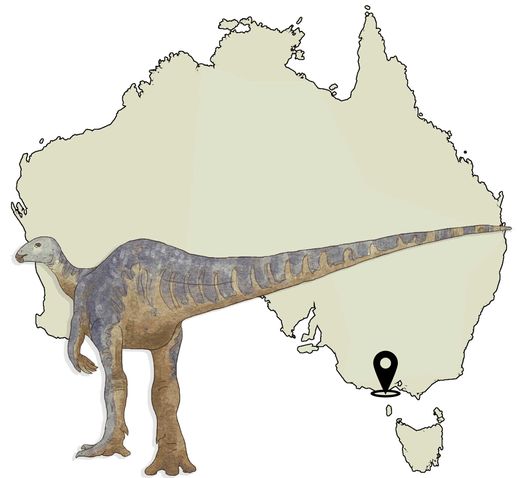 Discovery and publication
Found in 2005 by George Caspar and Mike Cleeland on Cape Otway, Victoria, west of the anchor marking the site of the 1880 sinking of Eric the Red. The site was later dubbed Eric the Red West. Described by Matthew Herne and colleagues in 2018.

Description
Diluvicursor is the fourth small ornithopod so far described from Victoria. It was deposited in a mass of plant debris in a high energy river.

The type specimen of Diluvicursor is the second most complete Victorian ornithopod skeleton described so far (after the skeleton possibly associated with the type skull of Leaellynasaura). The specimen includes a partial right shin and foot, as well as a nearly complete tail (missing only a few bones). One of the digits in the foot seems to show signs of an injury suffered while the animal was alive (i.e. a ridge of unusual bone growth), but more research will be needed to prove this.

Diluvicursor would have been similar in size to its ornithopod contemporaries in Victoria. The holotype represents an older juvenile about 1.2 metres long. However, an isolated tail vertebrae also found at the Eric the Red West site has been shown to belong to Diluvicursor as well; the ornithopod to which this vertebra belonged would have been approximately 2.3m long.

Like Qantassaurus, Diluvicursor was probably closely related to the Argentinean ornithopods Gasparinisaura and Anabisetia, and also potentially to the Antarctic form Morrosaurus. This suggests that Diluvicursor and its relatives thrived in Gondwana during the mid-Cretaceous, and that they could traverse between South America and Australia across Antarctica at this time.

Comparing Diluvicursor with other Victorian ornithopods is presently not possible. The type specimens of Atlascopcosaurus and Qantassaurus are jaws (a maxilla for the former, a dentary for the latter) with teeth, so Diluvicursor cannot be compared with them.

That said, Diluvicursor is undoubtedly different from the two partial ornithopod skeletons from Dinosaur Cove inasmuch as it has a much shorter tail and more robust toes. However, although those skeletons have historically been referred to Leaellynasaura, this is by no means certain. Jaws apparently referable to Atlascopcosaurus have been found at Eric the Red West, and at other sites quite close by, so the possibility remains that Diluvicursor is actually the back end of an Atlascopcosaurus — or even a Leaellynasaura! It is unlikely that Diluvicursor and Qantassaurus are the same, since Qantassaurus is known only from slightly older rocks exposed east of Melbourne.

A recent study of isolated ornithopod limb bones from Victoria (including those from the possible Leaellynasaura skeleton with a diseased shinbone) suggested that only two species of ornithopod were preserved at Dinosaur Cove. It is possible, therefore, that ornithopod diversity in Victoria was lower than previously thought. More fossils will be needed to prove this one way or the other.

Back to Dinosaur menu    Next - Fostoria